This is the same deceitful Government whose chief chowkidar (aka pradhan sevak) promised us on 23rd March 2020 that COVID-19 will be eliminated from India within 21 days if we only all:-

(i)  Shout collectively "Go Corona go !" like maniacs in public,

(ii) Switch off electricity and light candles at night,

(iii) Bang pot and pans on the anniversary of the BJP's foundation, and other similar silly things packaged in Hindu shastras to distract the foolish masses.

Of course nothing the unscientific and uneducated set of what the "strongmen" running the nation promised actually happened and that pesky little virus continues to spread exactly the way experts like IIM's Dr. Ravi Kapoor (@LockdownIndia) and other conservative scientists predicted.

Our "Government" also routinely ignored all qualified persons and preferred to believe the projections of their in-house "doctor", yet another RSS fool who they appointed as Chairman of the empowered Task Force on Covid, who we are informed has likely only passed 10th standard maths (and that too barely), as India is one of the few countries in the world where medical doctors don't have to study maths beyond Class 10 to get into medical schools (whereas even to get a job as a govt clerk you need to be 12th passed in maths).

On 17th May 2020 this Central Government, having realised that the COVID-19 containment situation is out of control, abdicated its responsibilities, and passed the buck to the State governments, where we have more RSS fools, like Arvind Kejriwal, in charge. It's evident that Mr. Modi, having lost all credibility in intelligensia, is afraid to face the nation on television and be exposed (once again) for the liar he is, so he is now reduced to writing open letters to Indians.

Now it's also an open secret to IAC members that the BJP and the AAP are both secretly collusive / fully bania dominated / USA sponsored parties who are only concerned with ensuring that business of their party financiers continues full blast and India becomes a consumer of US MNC sourced goods.  As expected, and as any scientist who understands virii / epidemiology would say, the infection numbers spiked immediately on Lockdown 4.0 (yet again as Dr. Kapoor would have it) in all the major cities after the incubation lag. The response of the "government" (a term used in its widest sense to include "anarchists turned looters" like AAP) was

(i) to REDUCE the number of tests .. and thereby the confirmations of infection

The reasons are not far to seek

1). There are no spare COVID-19 hospital beds in most urban cities

2)  There are no doctors and nurses

4)  Highly sub-standard medical items are reaching hospitals all over the country which have been Centrally sourced at highly inflated prices by Modi-Shah cronies. Doctors are refusing to accept these or work any more with them,

5) Our former IAC-ian but now incorrigibly corrupt CM Arvind Kejriwal is giving more and more "freebies" to his party's 5-star hotel bania financiers by converting their empty rooms into "hospital" rooms to be state financed, disregarding that there are no doctors, no nurses and no equipment there, and so on.

6) In the meantime Covid quarantined patients all over India are being treated like animals because the Govt machinery is too scared to go near them.

In the meantime the IAS mafia has also been making hay while the COVID-19 sun shines. Thousands of crores of slush money has been collected from business associations across the country to allow their member's factories, shops and business premises (like temples) to reopen. Even Mamata Banerjee's TMC party has allegedly taken slush money from religious babas and temple managements to allow them to reopen. This is all part of the new Amit Shah doctrine of co-opting opposition parties into their web of corruption.

So in the face of so much wide-spread corruption, systematic disinformation and disregard for citizen lives and health in the country, the IAC is constrained to issue the following

1. On the basis of conservative mathematical models which are based on standard epidemiology models and publicly available data (see attached image), IAC declares that contrary to the government issued numbers there have been at least 33 lakh COVID-19 infections in India as compared to the mere 1.8 lakh infections declared as confirmed by Government till date. IAC further declares it is reasonably expected there to have been at least 1.03 lakh deaths directly attributable to COVID-19 versus the figures of about 5,000 deaths issued by the Govt. (it is pertinent to mention that GoI has not denied or disputed these IAC projection models in our extensive formal correspondence with them over the last 1 month.)

2. IAC has concluded that the National Disaster Management Authority (headed by the PM personally) is deliberately encouraging the spread of COVID-19 in India by taking a series of extremely unscientific/unsound decisions by either ignoring the advice of expert scientists on the committees or by simply bypassing them and keeping them in the dark. IAC notes with concern that specific WHO guidelines are being disregarded by NDMA and replaced by unproven guidance from the USA which also has the highest rate of novel corona 2 infection in the world.

3. That all IAC members should continue to take all precautionary measures for their own protections in the face of systematic disinformation and lies by Governments to entice them to go out and thereby get infected. IAC reiterates that these governments are deliberately implementing unscientific policies (aka "Swedish model" / "herd immunity" theory etc.) to ensure that as many Indians get infected as fast as possible so their sputtering economies can be kick started.

4. That. IAC has issued the above statements only after considerable formal registered communications with the Home Ministry of India as well as the Government of the NCT of Delhi, and is pursuant to the replies received. These highly evasive replies leave IAC with no doubt now (similar to evasive replies received in various scams of 2010-11) that the present Governments are as equally corrupt as their predecessor Congress Govts were in 2010.

5. That IAC is concerned that the present government will resort to its usual device of staging a "war-like" situation (or maybe even an actual war) with our enemy neighbours as it is prone to do whenever they are on the ropes and public sentiment is against them.

NB: from now forward we shall be sharing a few of our communications with the Government to this HRA (Germany) mailing list to keep our overseas subscribers properly informed so they can plan for their parent's safety and lives back home in India.

PS: As these are internal confidential communications of IAC to its subscribers, it is urged not to circulate them outside the IAC information channels. The views of IAC's true patriots who are all unswervingly committed to the integrity and sovereignty of India, are liable to be misunderstood by the uneducated and under-educated aam-aadmi classes of "Bharat" who are being gulled by misuse of religious imagery and idolation by the forces of corruption.

In our next email, We shall detail what a bold government must do to control the menace of  COVID-19 pandemic in India. 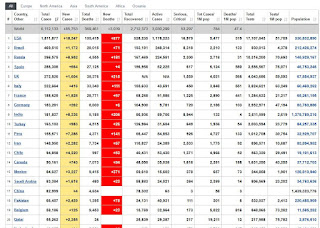 Posted by Hum Janenge at 5:21 PM No comments:

[IAC#RG] NOTHING TO CHEER ON GOA STATEHOOD DAY

30th May was Goa Statehood day but there is nothing to celebrate about.

Goans now realize the trap they got into by craving for statehood. The fanfare that heralded Statehood was not meant to be the start of Goa being in a right state! An illusion gone awfully sour.

With statehood the common man has lost out but only the politicians have become crorepatis. As a Union territory, we were ably managed with 28 MLAs and a cabinet of four. Today Goa is totally mismanaged with 40 MLAs and a jumbo cabinet of 12.

Very frankly the performance of the current BJP Government would have to be rated at Zero, given that Goans were promised the moon with Zero Tolerance to Corruption and Good Governance. It has been only U turns and rampant corruption all the way. The cavalier manner in which the current BJP government is heartlessly and mercilessly destroying Goa should be a matter of great concern.

It is distressing to see and be witness to the continuing rampant destruction and devastation of Goa. In 2012 the BJP had promised a 'Parivartan' and 'Acche Din', but Goa over the years has sadly by the day just been getting further corroded beyond recognition. It should have been the endeveaour of those in power to at least salvage and safeguard what remains of Goa. Unfortunately, Goa is getting defaced at an electrifying speed, losing its identity and culture and self-reliance. It is only the hard work, determination and resilience even in the face of adversity of the people of Goa that keeps it afloat.

Posterity will never forgive the current rulers for their selfish and dubious role in this further irreparable damage and destruction of what was once a beautiful Goa, the Paradise of the East. Sorrowing lies our Goa.

Posted by Hum Janenge at 4:28 PM No comments: