He has one more week to go..
Regards.
Girish Mittal

You received this message because you are subscribed to the Google Group HumJanenge.
You can post via email.
To unsubscribe from this group, send an empty message.
For more options, visit this group. 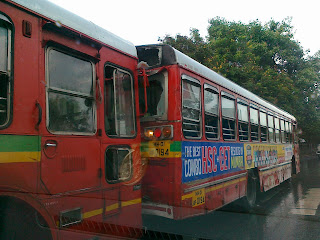 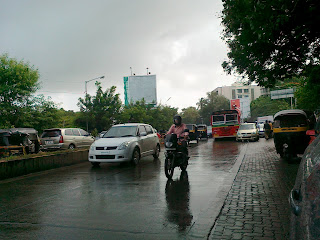 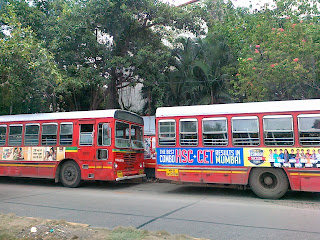 A trailing BEST bus rams into one ahead.

The forward driver will say, the Swft car wrongly came from the left, and hit my bus, so I had to brake hard.

The driver in the rear bus will say, I was driving slowly and had to apply brakes suddenly but brakes failed.

Basically why was the rear bus so close to the one ahead.

Why did the front bus hit the Swift.

Look closely, the Swift has its wheels turned left, a sign of trying to get out of the way.

This is just one of the hundreds of unreported incidents and accidents of BEST vehicles damaged, public money wasted by irresponsible, indisciplined drivers.

The two buses were still at the spot at around 13h15, ie around four houra later.

In short, not in service, leading to further revenue loss.


2012 MAY 07
Shri OP GUPTA
GM
BEST
Shri D KAPOOR
MD
MSRTC
Namaskar Mahoday,
Looks like the average BEST and MSRTC driver has no interest to follow any rules, directives, instructions, orders from any one.
In case of accidents, his usual excuse is, brake failure, or steering got locked
http://timesofindia.indiatimes.com/city/mumbai/Two-Brihanmumbai-Electric-Supply-and-Transport-bus-mishaps-daily/articleshow/13402116.cms
http://www.indianexpress.com/news/best-bus-rams-into-bhujbals-bungalow-wall-three-injured/952103/
The BEST and MSRTC have not explained why these drivers drive the way they do, and how they were selected as drivers in the first place, and in case of  incidents and accidents why they are not grounded, if not suspended, if not discharged.
Not to mention the hundreds of unreported cases of signal violations, lane cutting, driving in wrong, ie, extreme right lane, over speeding, wearing uniforms casually, slippers and chappals instead of shoes, no caps, shirts with unbuttoned top buttons.
It is truly sad case, and there is no hope for the general public, passengers, other users, if this is not addressed immediately on a war footing.
Thanqx.
Jagdeep DESAI
Secretary
Founder Trustee
Forum for Improving Quality of Life in Mumbai Suburbs
www.forum4iqolms.org
On Mon, May 7, 2012 at 1:46 PM, Jagdeep DESAI <jagdeep.desai1@gmail.com> wrote:


2012 MAY 07
Shri OP GUPTA
GM
BEST
Shri D KAPOOR
MD
MSRTC
Namaskar Mahoday,
An open letter, which you may give consideration in the public interest, or you may ignore in the interest of indiscipline and disorder.
A long time ago, there was a public bus service which was the best in India.
I had many years of real pleasant travelling as a passenger, first as a school boy, our school rented BEST single deckers as school buses way back in the 1970s, then, as a college student, then as one of the lakhs of daily passengers.
The drivers and conductors used to wear caps, shoes, and had their shirts buttoned.
The temperature and climate of Mumbai in those days was the same as now.
That was, a long time ago.
Amd though the examples are of BEST buses , their drivers., etc.,similar, if not same apply to the MSRTC.
Now the buses are so badly maintained, that a report shows just a few of the many examples.

In fact most buses are damaged in one way or another, almost all the buses with LED indicators  are seen with route numbers and destination written in chalk, because the LED are gone case, in the same buses,  the automatic doors are either not working, or they have been tied by the staff because the drivers do not want to wait for them entry and exit doors to open and close because they just screech to a halt from a fast speed, and then race off.
Not to mention the pathetic workmanship of the bus bodies, the seats are now giving way, not to mention again, the poor ergonomics, and so on.
http://www.dnaindia.com/mumbai/report_sorry-state-of-best-affairs_1685354
And even though there is an internal document, the BEST Traffic manual, not a single employee has not only not bothered to read it, let alone follow it, forget about laws of the land
http://www.bestundertaking.com/download_traffic_manual.asp
http://www.bestundertaking.com/pdf/Traffic%20Department%20Manual.pdf
Nowadays, the name has remained, BEST, but somewhere down the line, the service quality has given way to excuses, excuses, excuses.
Read what has happened
http://timesofindia.indiatimes.com/city/mumbai/Poor-conviction-of-BEST-drivers-in-fatal-mishaps/articleshow/13028606.cms
The unnamed BEST official says
>>>
Some officials from the transport undertaking admitted there was a need to discipline the drivers. A BEST committee member claimed that cases sometimes resulted in acquittals because witnesses failed to come forward to testify against the driver. Consumer rights activists have demanded that BEST buses should have speed governors and the department has already begun the process of indigenously manufacturing "speed-limit gadgets" to control the speed of the bus.

BEST officials claimed the number of fatal accidents has dropped and only seasoned/trained drivers are deployed on important routes.
>>>
Unfortunately the truth and fact is that witnesses are intimidated,  threatened, and pressurised not to attend the hearings in the BEST depots if at all these are held, forget about in the Courts, let alone give evidence.
Further, what is meant by only seasoned / trained drivers are deployed on important routes.
All routes are equally important.
And does that mean the rest are untrained, and left to terrorise passengers, pedestrians, other road users.
Why aren't drivers trained.
What is this training, breaking all signals all times of day, not stopping within 600 mm of the bus stops, cutting lanes, rash driving, reckless driving, etc
Aren't licensed drivers by definition supposed to be trained, and supposed to follow traffic rules.
And these are only the few offenses which are reported, how about the thousands of unreported and worse, ignored incidents which seen day and night on our roads.
Excuse me, kindly excuse the word, but what is this c@@@p

>>>
http://www.dnasyndication.com/dna/dna_english_news_and_features/MSRTC-bus-rams-into-divider/DNMUM239129
http://www.dnaindia.com/mumbai/report_two-best-bus-collide-in-kurla_1681658
http://articles.timesofindia.indiatimes.com/2012-04-23/mumbai/31386636_1_bus-driver-brake-failure-number-of-fatal-accidents
http://www.dnaindia.com/mumbai/report_best-puts-brakes-on-accidents-in-mumbai_1675103
No reference to total lack of complying to traffic rules
http://epaper.dnaindia.com/story.aspx?edorsup=Sup&ed_code=820009&ed_page=1&boxid=26544014&id=14248&ed_date=04/10/2012
Report from 2008
http://www.mumbaimirror.com/article/2/200802162008021602330265474f7a548/BEST%E2%80%99s-red-monster-rams-into-divider-kills-two.html
A public service, which has a responsibility of lakhs of passengers, has no qualms in hiring untrained, partially trained, poorly trained drivers, and after that, has no qualms in not bringing them to book in case of rash, reckless, dangerous driving, which mostly go unreported
And if you observe around, when you are on the roads in Mumbai, you will see that
01 The drivers, trained, untrained, young, old, experienced, inexperienced, do not follow any traffic rules, and they are unleashed on the Citizens of Mumbai, endangering liuves, limbs, property.

Is this not corruption of a high order
02 They drivers do not stop at the bus stops, agin endangering the waiting passengers's lives, blocking traffic, wasting fuel because so many vehicles are blocked, and smooth flow of traffic is affected
03 The drivers and conductors do not wear the complete uniform, most of them wear sandals or chappals, keep their shirt buttons open, I have seen a driver of the BEST AC bus, driving with a vest, banian, on duty.

Such things give a very very poor impression of the BEST to any body, apart from tourists.

I have seen drivers of Karachi's Green Bus Service, wearing ties, and caps,  even though the temperatures there are as high as in Mumbai in APR.
Though the lighter side, and we can take heart that our fate is not as bad can be read on this

http://creativewriter.ning.com/profiles/blogs/amazing-buses-of-amazing-karachi
04 The errant  BESTdrivers who knowingly violate traffic rules are confident that neither the BEST administration and neither the MTP will take any effective punitive action on them, so they continue to carry on their dangerous driving
05 If at all the driver is caught, at the hearing, the witnesses and victims are made out to be the offender, this has been seen time and again, unions, fellow staff are not only on their side of the errant driver, but make sure the victim is made to get of the exit very fast
06 The MTP deliberately ignore violations by the BEST drivers, even while taking action for say, breaking signals by LMV, and so on, thereby further emboldening their arrogance
http://www.dnaindia.com/mumbai/report_best-has-worst-finance-msrtc-bad-buses_1672172
http://timesofindia.indiatimes.com/city/mumbai/Bus-driver-was-at-fault-says-BEST/articleshow/12565588.cms
http://timesofindia.indiatimes.com/city/mumbai/One-biker-killed-18-injured-as-bus-overturns-in-Mumbai/articleshow/12560671.cms
http://www.mumbaimirror.com/article/2/201204072012040722113590626d9c865/Day-after-Bandra-accident-which-left-biker-dead-BEST-suspends-rash-driver.html
Thanqx.
Jagdeep DESAI
Secretary
Founder Trustee
Forum for Improving Quality of Life in Mumbai Suburbs
www.forum4iqolms.org
>>>

The driver of the BEST double-decker was responsible for Friday's mishap in Bandra (E) and there was nothing wrong with the bus, said senior officials of the transport undertaking.

With the Kalanagar turn (from Bandra-Kurla Complex, towards the Western Express Highway) coming at a sharp angle, any speed above 20 kmph could result in a bus tipping over, said BEST general manager Om Prakash Gupta.

Speaking to TOI, Gupta blamed the driver, Jalimdar Bhosle, for the accident, alleging that he was driving the bus at a much higher speed in a bid to get past the Kalanagar signal. "The signal had just turned amber from green. The driver, who was in a tearing hurry, swerved the vehicle and it overturned," he explained, adding that an inquiry would be conducted against the driver for alleged rash and negligent driving.

Experience was also not on Bhosle's side. "He is not a seasoned driver and has only over two years' experience," said Gupta. "Whenever a bus takes a turn at a signal, the turning radius plays a key role. The driver has to use his judgment, reduce the speed of the vehicle and then turn the vehicle accordingly. This will ensure that the bus's centre of gravity is not displaced."

A senior BEST official from the engineering department said there was no problem with the vehicle. "We inspected the bus on the spot and found out that the mishap was not caused by any technical problem. It is a case of human error and the driver is to be blamed (for the accident)," the official said.

Experts in the transport body say the centre of gravity of a BEST double-decker, weighing around 7,600kg, is at the bottom of the vehicle. "The driver has to bear in mind that passengers are not inconvenienced when brakes are applied or when he changes gears and accelerates on an empty road," one of them said.

However, BEST committee member Ravi Raja alleged that this was rarely the case as reckless driving was rampant, drivers jumped signals frequently and also went beyond permissible speed limits. "I have been in the committee for two decades , but have never heard of a double-decker overturning. This is alarming," he said.

Another committee member, Dilip Patel, demanded that the double-decker buses be manned by only experienced drivers.
>>>

What is he wanted for. I know many Bhattacharyas being from West Bengal State. Just bfor curiosity's sake, Sir ?
JP.

Hello,
If any one has the contact details of Mr Dev Ashish Bhattacharya,
RTI activist from Shimla (HP), please send them to me off- group at:
rtiwanted@yahoo.com
Thanks
RTIwanted