Panaji's first multi-level car park which was inaugurated amidst much fanfare on 31st October 2016 by Manohar Parrikar as Defence Minister is idling for almost two years. The foundation of that project with an estimated cost of 21 crores was laid on 24th October 2012 by Chief Minister Manohar Parrikar and after missing many deadlines was finally completed at an official figure of a whopping 35 crores.  While it now remains as a white elephant it is an unpardonable criminal waste of public funds. Those who planned this much needed utility but at a very wrong location must be brought to book and punished for having carelessly and possibly very intentionally burdened the tax payer.

It's high time this abandoned Car park is put to some alternative use. Perhaps converted into a Animal shelter to house those hordes of straying cattle and dogs which will at least make Panaji safer for all. It would also be a right step towards making Goa's capital a Smart City.

John F. Kennedy had said "We will neglect our cities to our peril, for in neglecting them we neglect the nation"

Posted by Hum Janenge at 4:29 PM No comments: 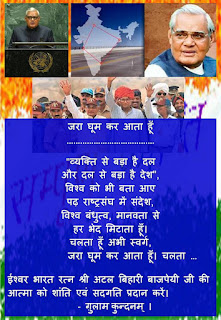 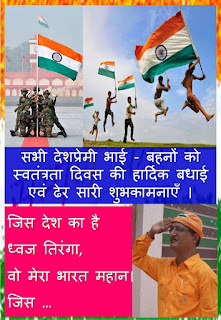 [IAC#RG] INDEPENDENCE DAY GREETINGS TO YOU

Let us today vow to work towards ensuring that in 2019 we will see a truly Independent India. The Lok Sabha Elections next year will be our final opportunity to politically trash the BJP and restore our country's Secular outlook that the founding Fathers of the Constitution had so dedicatedly toiled for. To restore democracy our India must wholeheartedly and selflessly unite against the deviously Communal, Corrupt and very Divisive BJP.

Over the last four years under Narendra Modi our great country has ebbed to dire straits. Raj Bhavans have been converted into BJP dens for political chicanery. The BJP has over these years trampled on even the Independence of the Judiciary.  And more importantly while eroding the autonomy of even the Reserve Bank, Election Commission and the CBI, Narendra Modi and the BJP have ruptured the very secular fabric of our great nation.

Posted by Hum Janenge at 5:54 PM No comments:

[IAC#RG] OH, IT CAN HAPPEN ONLY IN GOA

Our Goa may be India's smallest State but it has been in the news for all the wrong reasons:

-          We have shown the nation ways and means to circumvent the Anti- Defection law, with political prostitution and party turncoats at its very hilt

-          Chief Minister Manohar Parrikar again leaves for New York and will run the administration this time through Phone, Fax and Email despite very poor internet connectivity in the State

-          With every rule and law bent and broken, Goa leads in rampant corruption and glaring nepotism

-          And to top it all, Goa is now the country's  hub for narcotics, gambling, prostitution and crime

Posted by Hum Janenge at 4:18 PM No comments:

Sub.:- An open letter of protest against the decision of the Commission

I herein below mentioned the facts and circumstances to show that a mockery of justice has been done by the Commission.

On 02.12.2016 I lodged the complaint in connection with the present case for the victim Mr. Montu Mondal who sustained multiple pellet injuries due to firing by BSF on the date of the incident. On 16.10.2016 he submitted a written complaint before the Superintendent of Police, Murshidabad against the perpetrator BSF personnel but no action was taken on the complaint. The Commission took cognizance of my complaint dated 02.12.2016 and called for reports from the authorities. The Commission received reports both from the BSF and the police authorities.

On 10.07.2017 I (through Mr. Biplab Mukherjee, the then Secretary of MASUM) submitted comments before the Commission on the report of BSF and the police inter alia stating that the BSF report is nothing but a mere report of self-defence by the BSF. The BSF report was not an enquiry report because the victim was not heard; he was not given any opportunity to make his submission on the alleged incident of torture upon him, his complaint to the Superintendent of Police, Murshidabad was not considered, his available witnesses were not heard and his medical reports were neither perused nor considered. The BSF report was blank on giving any information on the victim's side of grievances and only provided information which was suitable for the BSF.

In my comments I further stated that police report submitted by the SP, Murshidabad also suffered from material irregularities such as the victim was not heard; he was not given any opportunity to make his submission on the alleged incident of torture upon him, his complaint to the Superintendent of Police, Murshidabad was not considered, his available witnesses were not heard and his medical reports were neither perused nor considered. The enquiring police officer did not bother to do those things to make his report a neutral and acceptable one. The police report failed to put any information why the victim's complaint before the Superintendent of Police, Murshidabad was not registered as FIR. Such conduct of the police was against the guidelines on the mandatory registration of FIR issued by the Supreme Court of India in the case of Lalita Devi vs State of U. P. and other—reported in AIR2014SC187.

Therefore, the Commission overlooked the issues as well as the facts involved which directly indicate gross violation of human rights of the victim and the Commission actually saved the skin of the perpetrator police and BSF personnel by taking a haste and half-hearted decision.

The victim prayed for justice before the Commission because the Commission has powers to hold neutral inquiry, to examine and call for records, to hear the victim and any other witnesses independently and other powers relating to inquiries as envisaged under Section 13 of the Protection of Human Rights Act, 1993. But the Commission did not bother to use any of those powers in the present case to establish the truth. Therefore no justifiable required action has been taken by the Commission in this present case.

The function adopted by the Commission in this case without using its powers relating to inquiries is a deliberate act of denial of a just, fair and reasonable proceeding and also against the principles of natural justice.

--
Kirity Roy
Secretary
Banglar Manabadhikar Suraksha Mancha
(MASUM)
&
National Convenor (PACTI)
Programme Against Custodial Torture & Impunity
40A, Barabagan Lane (4th Floor)
Balaji Place
Shibtala
Srirampur
Hooghly
PIN- 712203
Tele-Fax - +91-33-26220843
Phone- +91-33-26220845
Mobile (0) 9903099699
e. mail : kirityroy@gmail.com
Web: www.masum.org.in
Disclaimer:The information in this email is confidential and may be
legally priviledged. It is intended solely for the addressee. Access
to this email by anyone else is unauthorised.If you are not the
intended recipient, disclosure,copying,distribution or any action
taken or omitted to be taken in reliance on it,it is prohibited and
may be unlawful.In such case,you should destrioy this message and
kindle notify kirityroy@gmail.com by reply email.
Posted by Hum Janenge at 8:54 PM No comments:

Re: [IAC#RG] ARE POLITICIANS MOST IMPORTANT PEOPLE IN INDIA ?

Quality of Democracy and Governance depends upon quality and character of Legislators and Public Servants.

To improve the quality of Legislators, bogus Representation of People Act must be replaced soon with new perfect law empowering  Citizens to monitor performance of Legislators.

Citizens must initiate Nationwide Campaign demanding replacement of the above Act.

The last paragraph is correct. We deserve what we voted for. We are unfit for democracy through ballot box as our capability to cast vote is driven by many other factors which are not relevant
On Fri, Aug 10, 2018, 7:44 PM Venkatraman Ns <indiaresists@lists.riseup.net> wrote:

To
India Against Corruption

ARE  POLITICIANS  MOST IMPORTANT PEOPLE IN INDIA ?

It is surprising that leaders of political parties are looked upon as demi Gods by the followers and the media. This is inspite of the fact that most of the politicians today are not of intellectual class or even honest people. Most of them have little achievements to claim.

Unfortunately, these are the people deciding the destiny of India.

There are thousands of intellectuals , genuine philosophers, scientists, educationists and others in India  who are commanded by these politicians.

Looking at the type of politicians in India today, one gets an impression that we are paying  too big a price for democratic system that we follow.

Should we blame the democratic system or  think  that  people get the type of government that they deserve.

Nandini voice for The Deprived

Posted by Hum Janenge at 8:43 PM No comments:

Despite the Bombay High Court having ruled that good roads is a fundamental right of every citizen, the roads across Goa are in a very appalling state. Potholes and craters are galore. Some roads which were hot-mixed just before the monsoons have been washed away. What a criminal waste of public funds.

Very sadly in many parts of Goa, you have to navigate down a lot of awful roads to find a motorable one.

Lack of funds cannot be an excuse as this government has been merrily squandering public funds on unnecessary and needless extravaganza.

The crores being drained from the State exchequer on the medical treatment of Chief Minister Manohar Parrikar and his ailing Ministers can wait and can't be a priority, as the Government cannot allow the public to be at the mercy of accident prone roads. The welfare and well-being of Goa comes First.

Posted by Hum Janenge at 5:02 PM No comments: